Cities to visit in the south 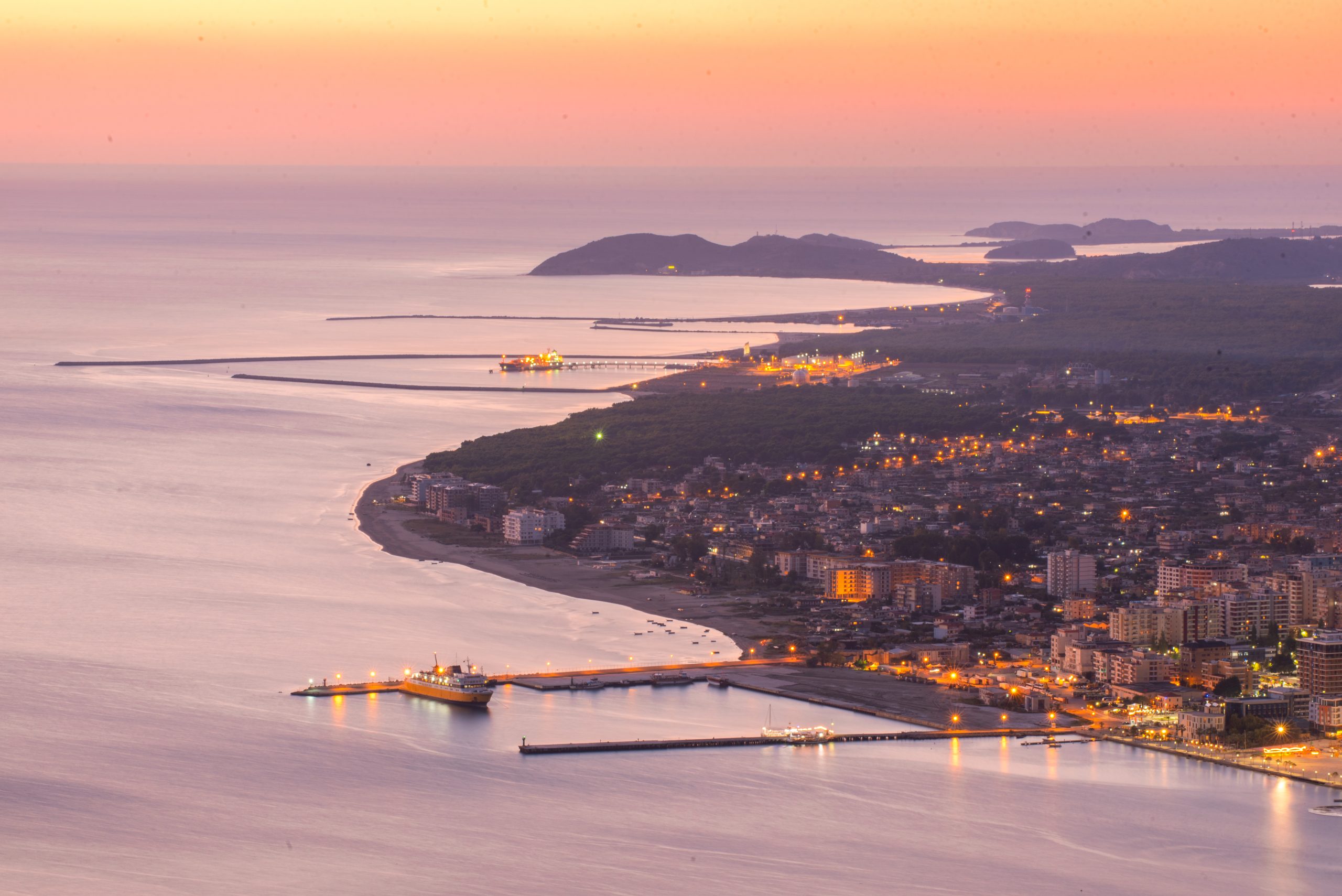 Known in the ancient times as Aulona, ​​Vlora is the second largest port city in Albania. Vlora has had a great historical value over the centuries, as it is also the city where the Declaration of Albanian Independence was proclaimed on November 28, 2012.
“The Nymph of the Ionian coast” is the nickname that foreign travelers over the years have given to this fabulous coastal city, which has always had an impact on the history, politics and economy of Albania due to its favorable geographical position.

Orikumi, located at the place where the Adriatic and Ionian Seas meet, is a small coastal town at the foot of Llogara Park. Around the fifth century BC – thanks to its useful geographical position, the city served as a strategic port. One of the most important battles of Julius Caesar’s military career, between him and his powerful opponent, Pompey, took place in Orikum.
For the first time in 1958 an expedition with Albanian-Soviet militias and archaeologists excavated under an area of ​​400 square meters, discovering a monument in the shape of a half-arch and some stairs carved into the rock, which was interpreted as a theater. Archaeological excavations in old Orikun have returned regularly since 2007, conducted by an Albanian-Swiss research mission with archaeologists, architects, restorers and specialists from Europe. 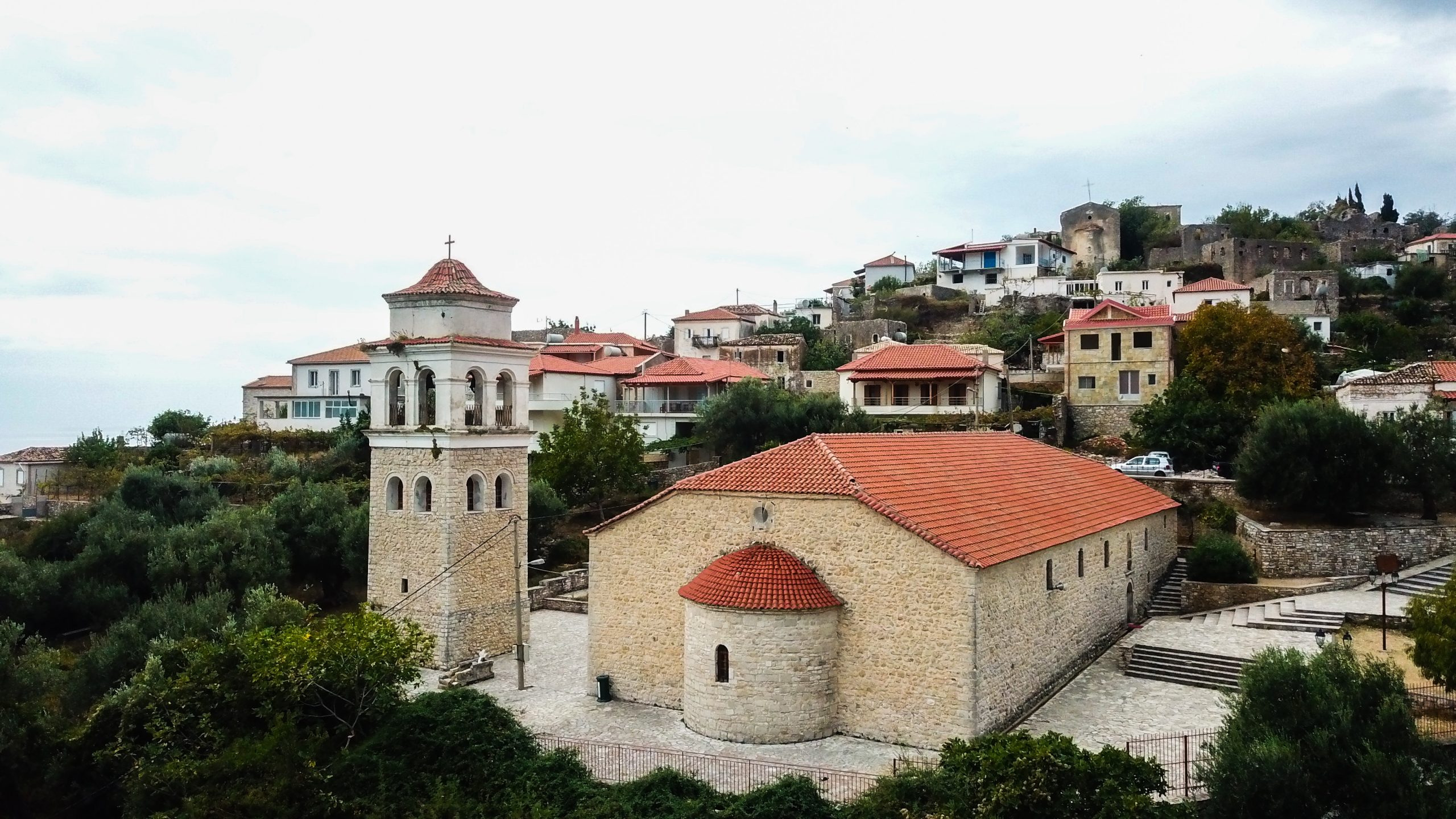 Himara, located in the south-western part of Albania, is characterized by mountains and hills that run directly into the crystal clear Ionian Sea. The small but magical bay of Himara offers impressive views, making it one of the most visited touristic cities in the south.
Himara is rich in cultural and historical sites. Fans of archeological finds can visit the castle of Himara, the two Byzantine-style churches “St. Mary” and the Episcopal church.
Also, the Monastery of St. Mary in Dhërmi, the Church of St. Theodore and the All Saints, the old Qeparoi, the Castle of Sopot and the Cave of Pirates are some touristic attractions located near Himara and can be visited by all tourists.

Located on a mountain slope, Saranda is known to all as the ‘the summer capital’. This coastal city holds more than 2000 years of rich history. Saranda is mentioned in the writings of many well-known historians of ancient times, such as Strabo, Ptolemy, and Ciceroni.
The name Saranda comes from an early Christian monastery dedicated to the Forty Saints (Ágii Saránda in Greek and ‘Santi Quaranta’ in Italian). The Forty Saints Monastery dates back to the 6th century and is located at the top of the mountain. Lekursi Castle is located at the highest point of the city.
In the heart of the city of Saranda is located the Basilica Synagogue, which was discovered after a few archeological excavations. From this excavations was also discovered a Basilica and two mosaics with fish figures.
The most frequented city during the summer in Albania has the highest number of sunny days in Europe, with about 300 days.
Its proximity from the village of Ksamil, which offers stunningly bays of the Ionian sea, further adds the attraction towards Saranda. 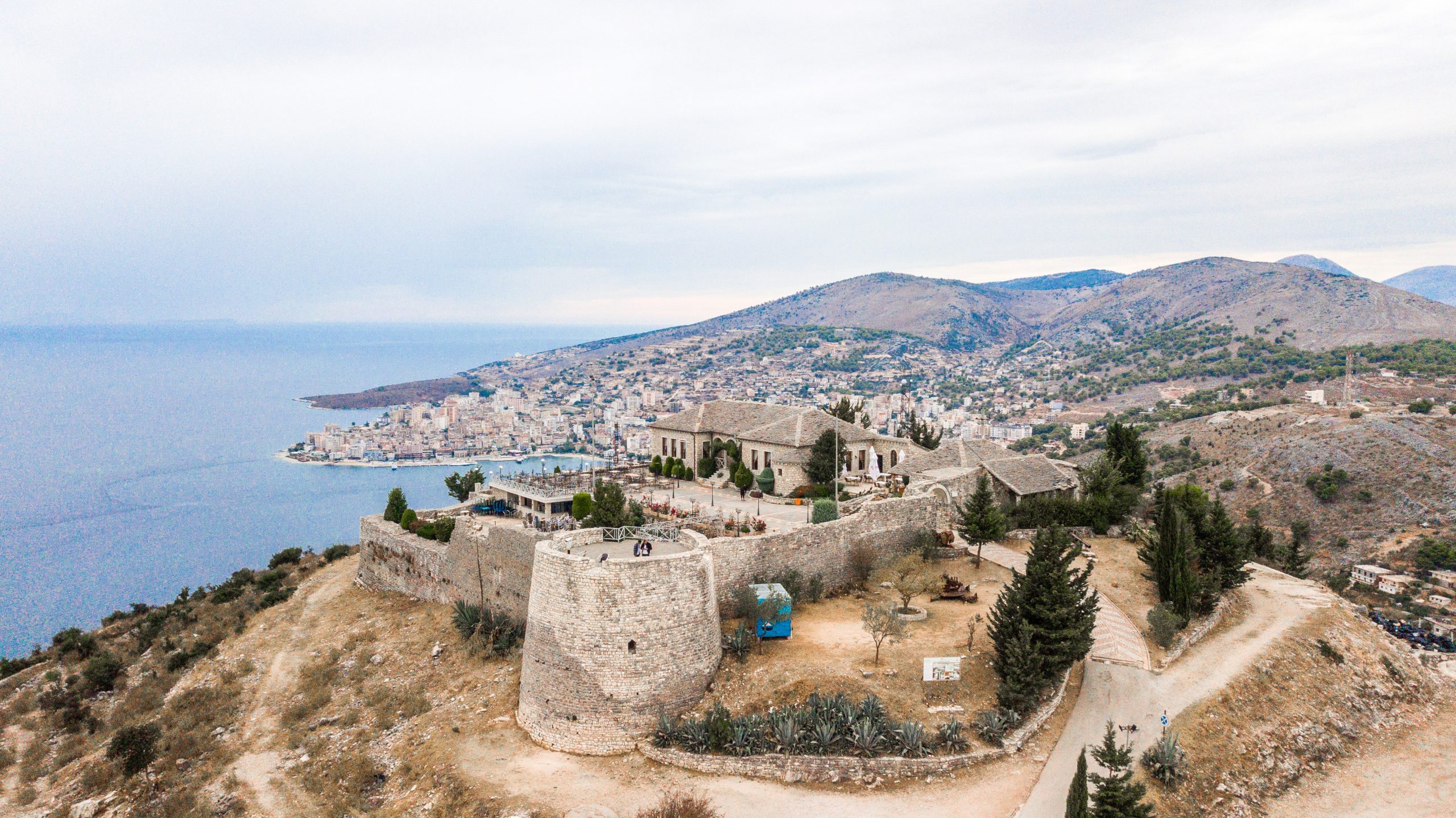 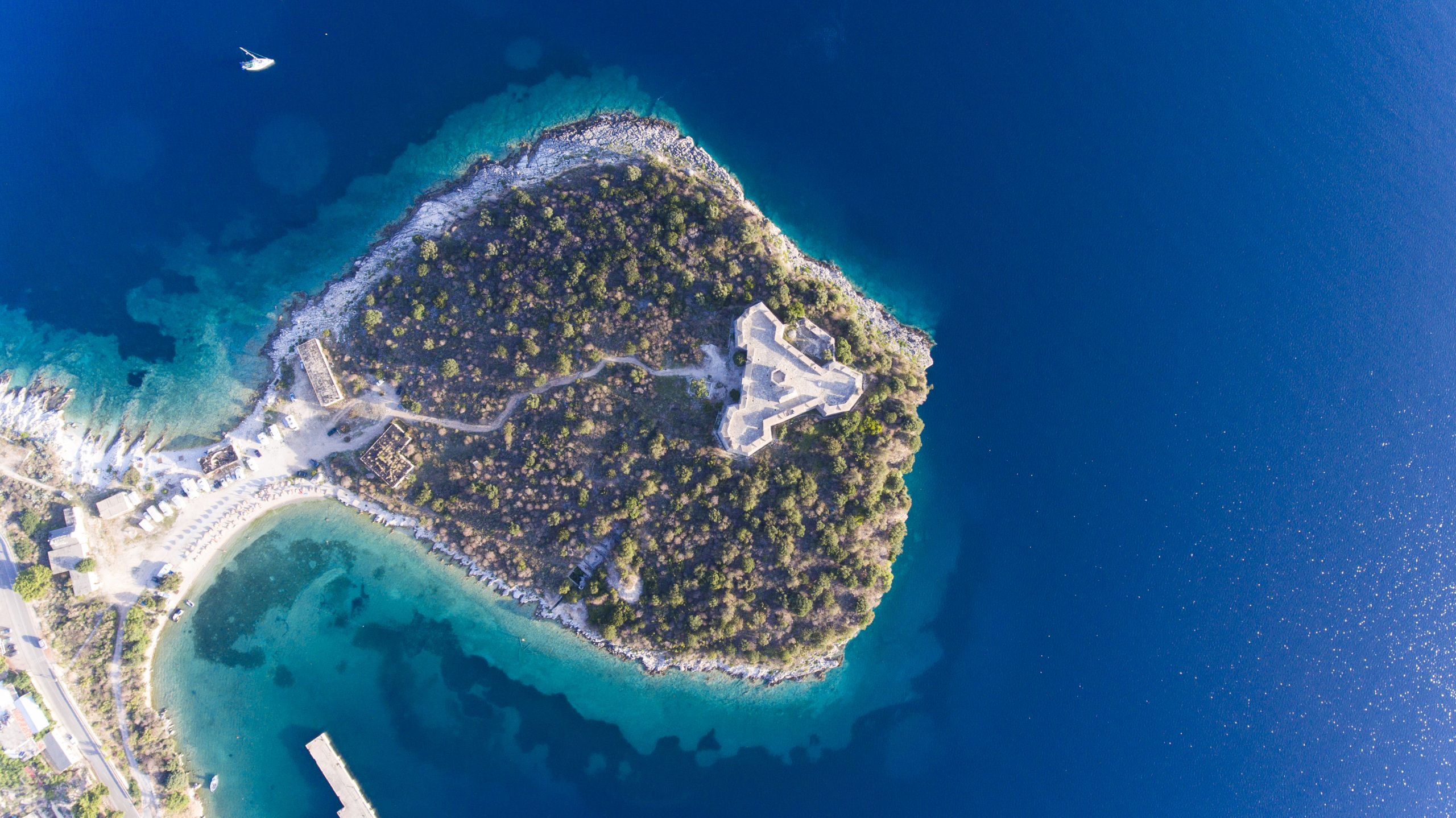 The castle of Ali Pasha in Porto Palermo

The castle of Ali Pasha at Porto Palermo bay is a small castle located a short distance from Qeparo village. The castle was built in honor of Ali Pasha’s wife, Vasiliqia.
This castle resides in one of the most astonishing bays of Ionian coastline and is a strategic place that has long served as a point of observation and control of territorial water’s. This castle attracts thousands of visitors during the summer season who are curious about the mystery and history that surrounds it.

Lëkursi Castle is located 2 km south of Saranda. This Castle has a quadrangular shape, with towers located on each corner. The castle was built in the year 1537 by order of Sultan Suleyman the Magnificent, during the Siege of Corfu. The castle is located at the highest point of the city and the view from there is extraordinary. 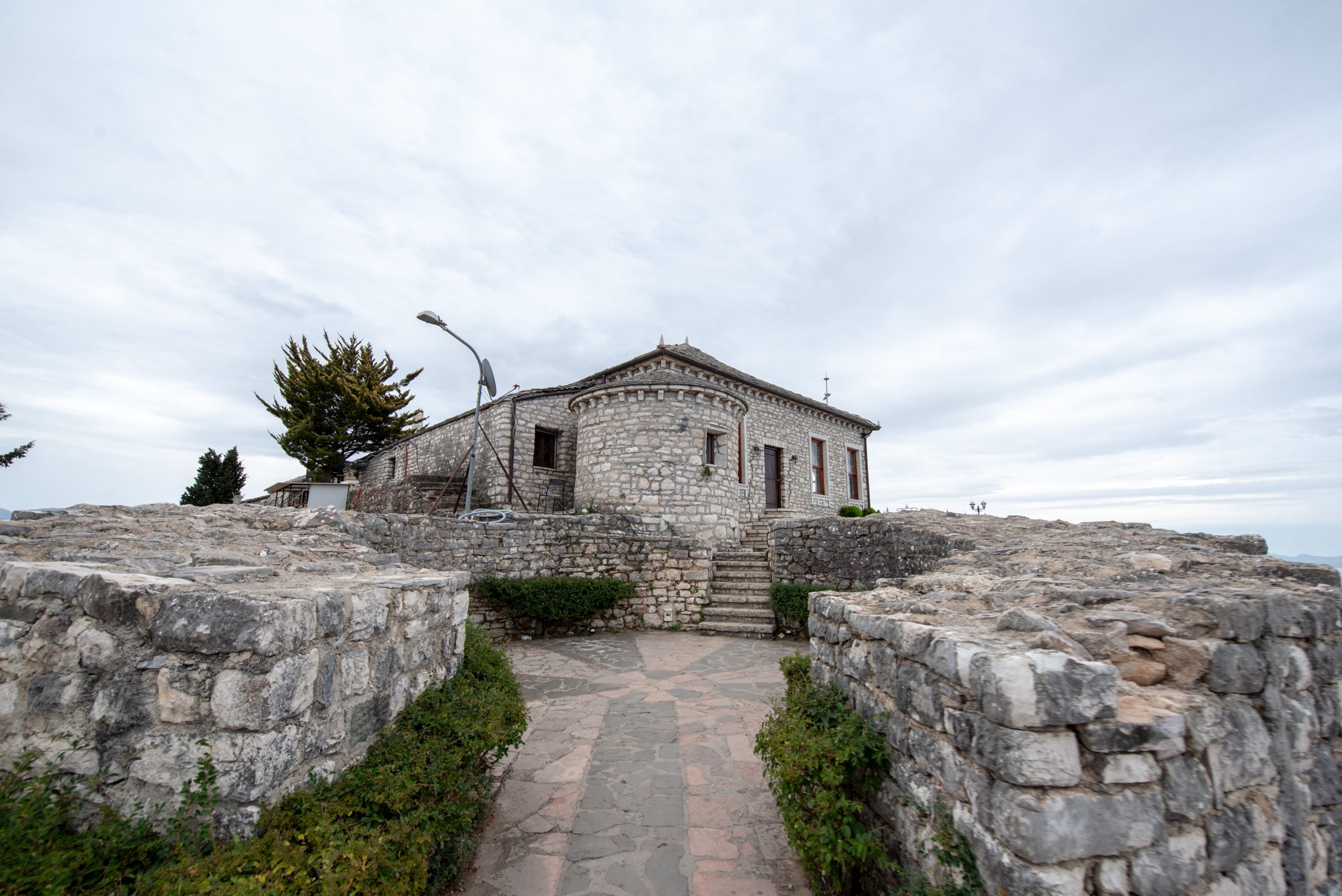 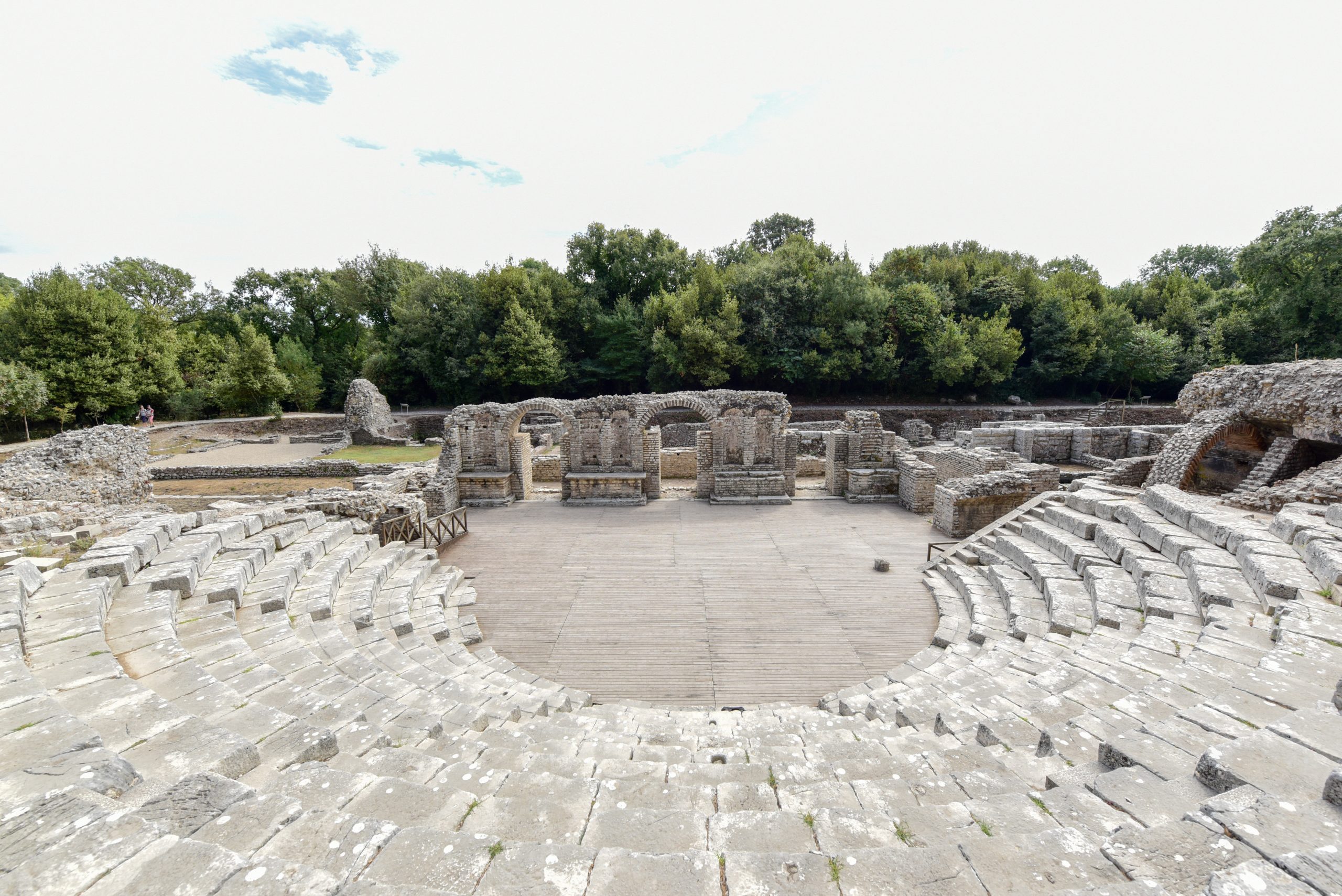 Butrinti is located on the most southwestern part of Albania. Butrinti National Park preserves a historical value of the Albanian heritage.
Within this site you will find a Greek style theater and a Roman style forum. Butrinti is the most important and the most frequently visited archaeological site of Albania and is part of UNESCO Heritage since 1992. The Butrinti Lake is highly praised for its biodiversity of flora and fauna.

Finiq (Phoenice) is located near the modern city of Saranda, about 20 km north of Butrinti Lake and the Albanian border with Greece. The archeological site is rich in finds from the Byzantine and Classical periods.
In Finiq you can find several archaeologically important relics, including a small ‘prostylos’ temple, a theater, Hellenistic houses and several Roman water cisterns. Also, this picturesque place has an important Byzantine church. 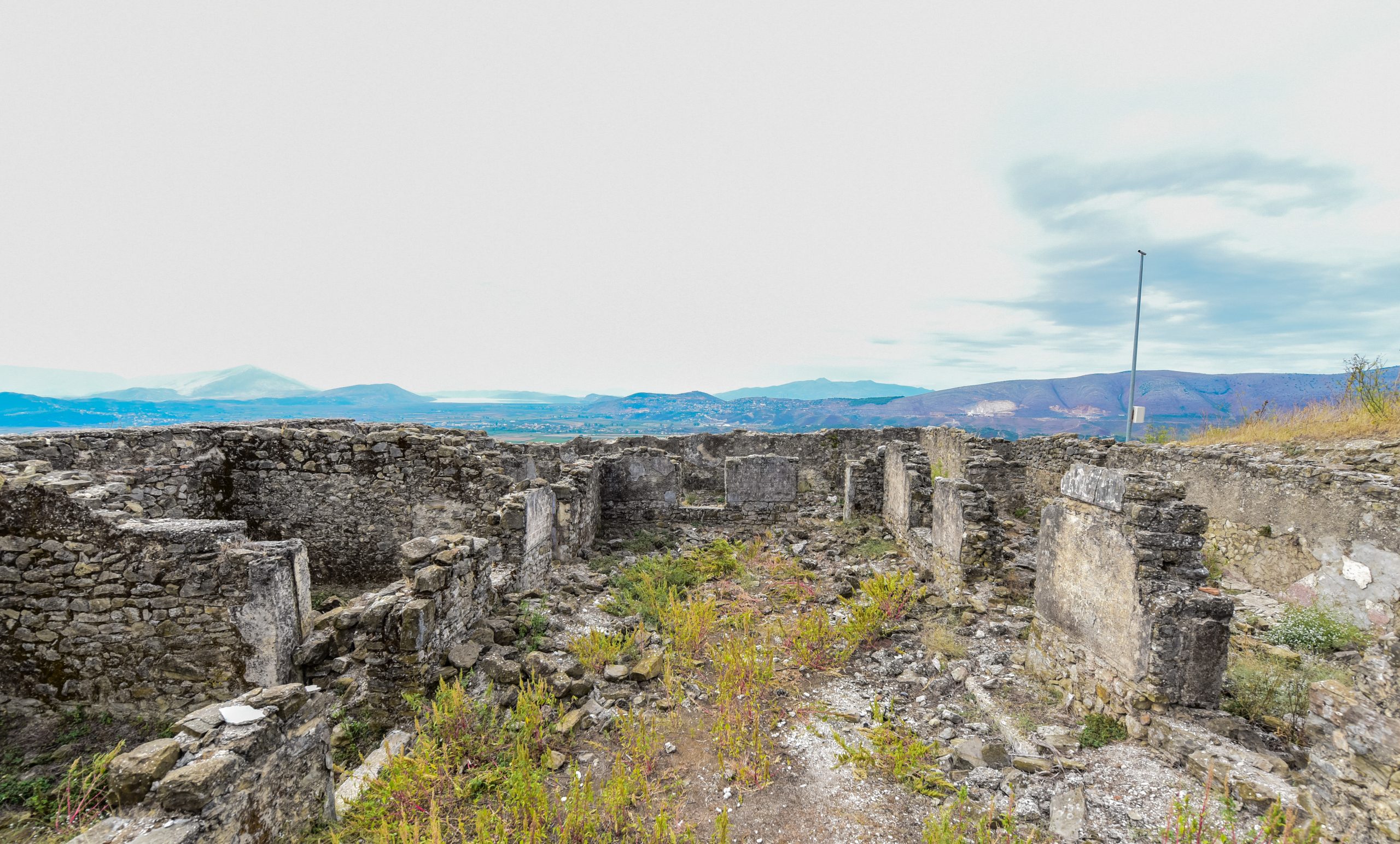 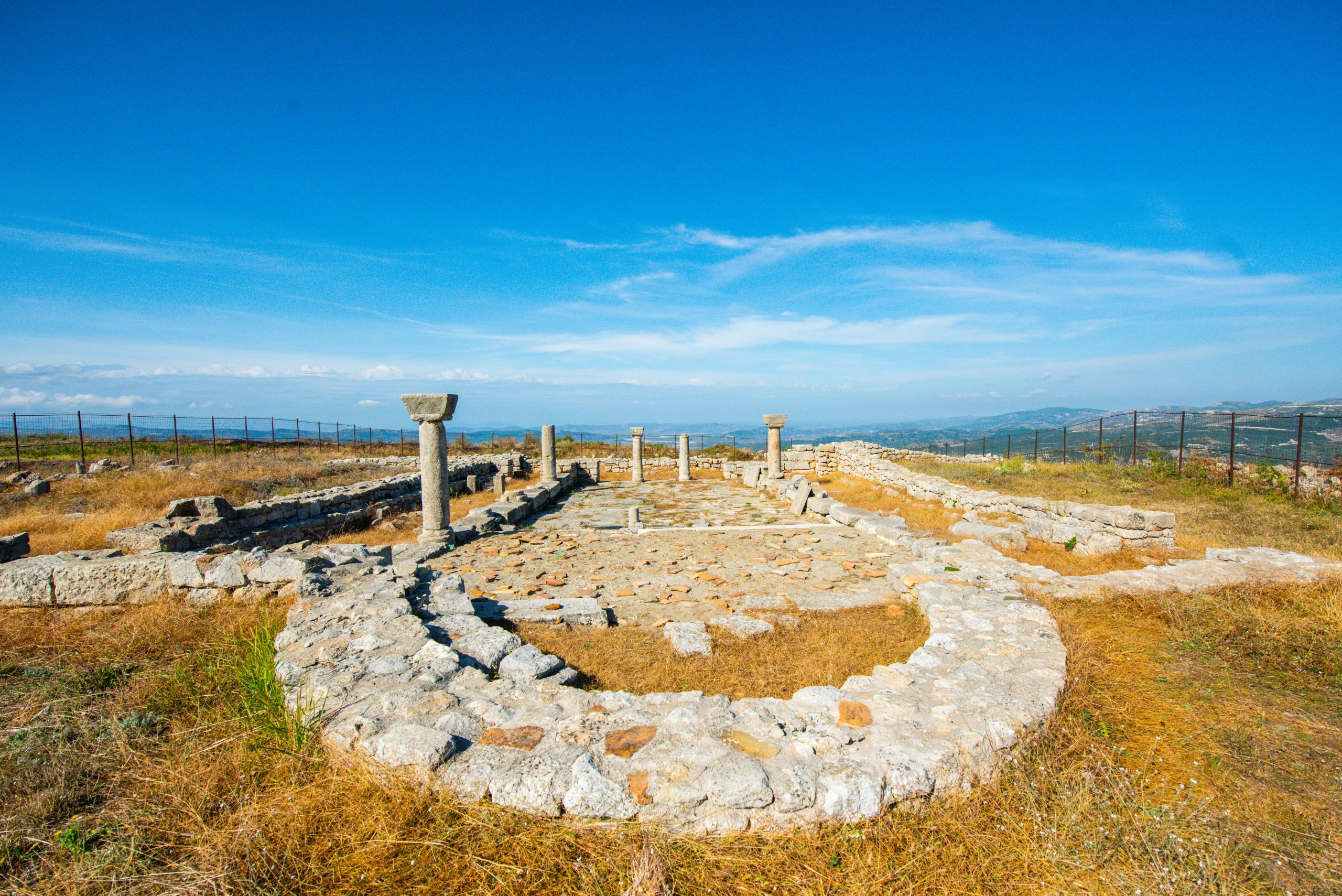 Bylis was established as a settlement in the 3rd century BC. Bylis, organized in the form of Greek city-states, served as the political, economical and cultural center of the region. Being governed by a body of civil servants, Bylis rose to fame with the introduction of a bronze currency system and a reputation for having skilled artisans.
The cathedral is perhaps the most impressive area within Bylis. It consists of the basilica, the baptistery and the diocese complex. The gate leading to the entryway is made with an extensive mosaic. Notably, it is the largest mosaic discovered in Albania to date. It displays scenes reflecting the daily life of shepherds, fisherman’s, etc. Bylis is the pride of Albania’s cultural heritage.

Antigonea was a very short-lived city, lasting for approximately only 150 years. It was founded by one of the most famous names of the ancient world, King Pirro of Epiri (319-272 BC).
At the beginning of the third-century BC, Pirro was forced to go and fight in Egypt. His abilities impressed Berenice, the wife of King Ptolemy of Egypt, who decided to offer him the hand of her daughter, Antigone, in marriage. In token of his gratitude to his first wife and her family, Pirro decided to build Antigonea. 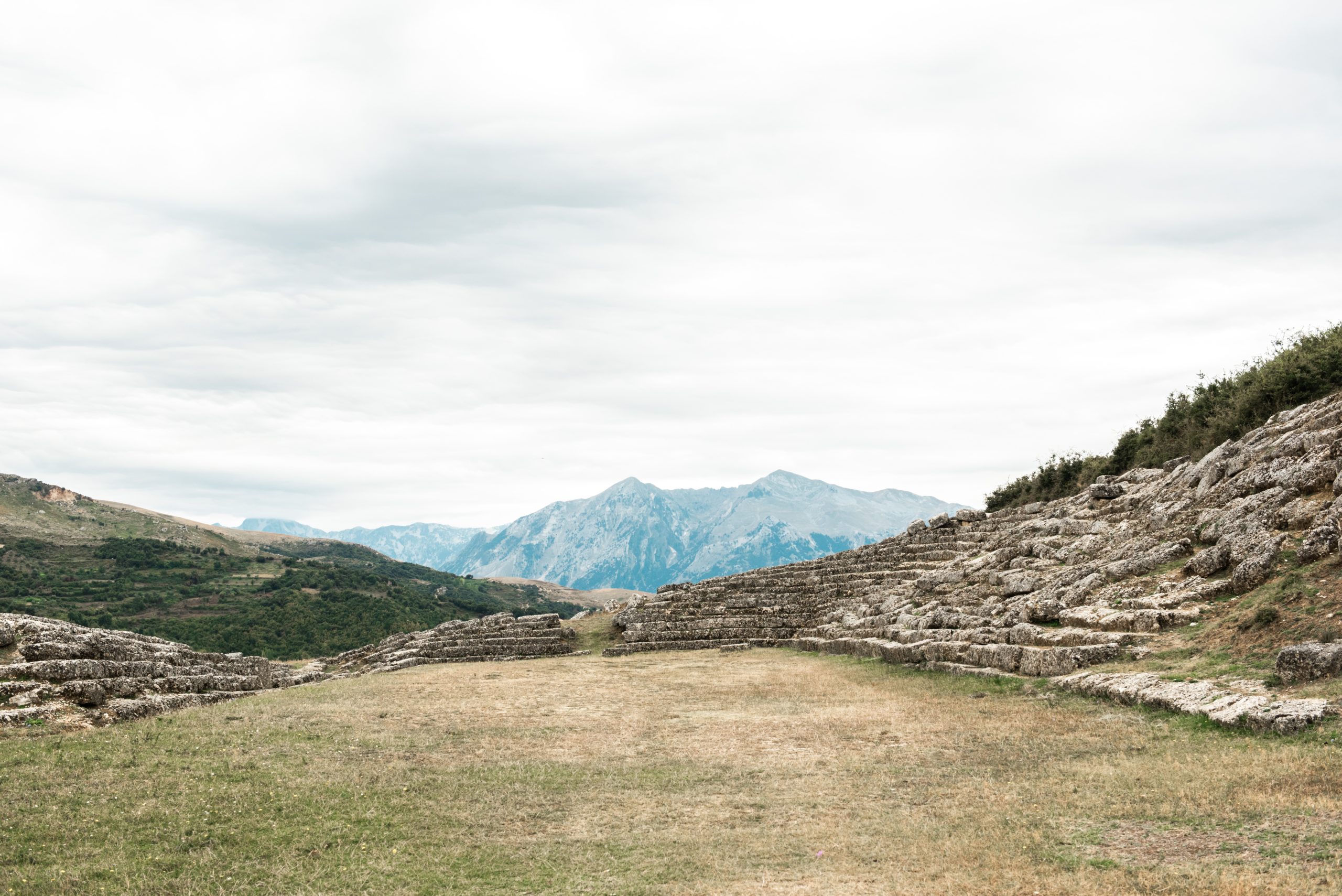 The Amantia National Park is located up high the Kurveleshi Mountains, a 50 minute drive east of the city of Vlora.
Aside from it’s spectacular location and biodiversity, Amantia offers traces of ancient history, as it was once the capital of the Illyrican tribe of Amantes, around V century BCE. Among the most preserved archaeological finds is a stadium and a significant sculpture known as God of Fertility, which is currently displayed at the National History Museum in Tirana.

The famous roman orator, Ciceroni, was so amazed by the beauty of Apollonia that in one of his writings, he referred to it as “magna urbs et gravis” (the magnificent and important town). The ancient city, founded in the 7th century BC by the Greek colonizers of Corinth and Korkyra, is located 11 km west of the city of Fier. The most interesting ruins are those of the “City Council”, “Library”, “Arch of Triumph” and “Temple of Artemis”.
It is worth mentioning the “Odeon” theatre, founded in the II century B.C, which once accommodated approximately 10,000 spectators. This impressive destination is easily accessible and offers magnificent views of the Adriatic coastline and a range of objects that have historical and archaeological value. 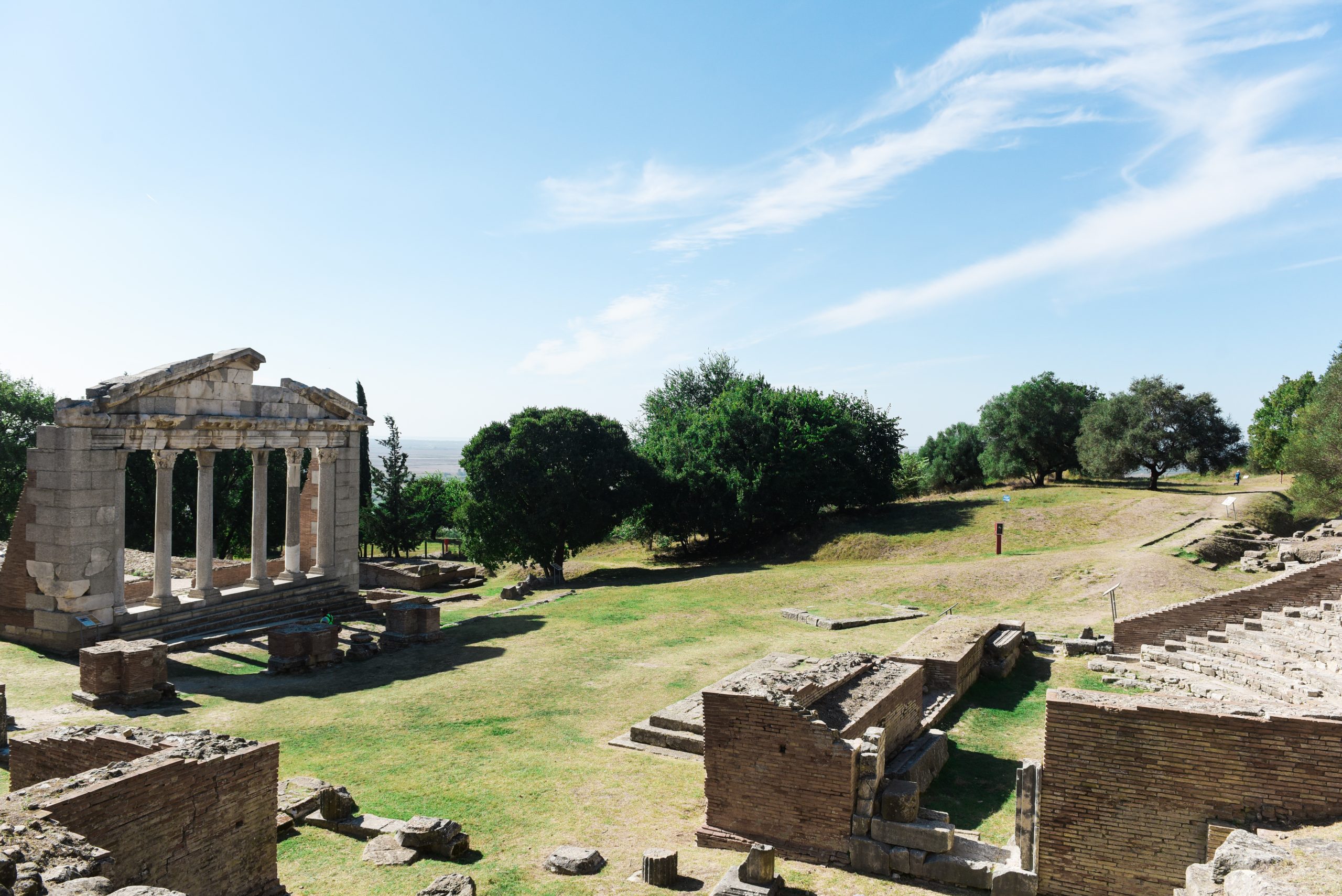 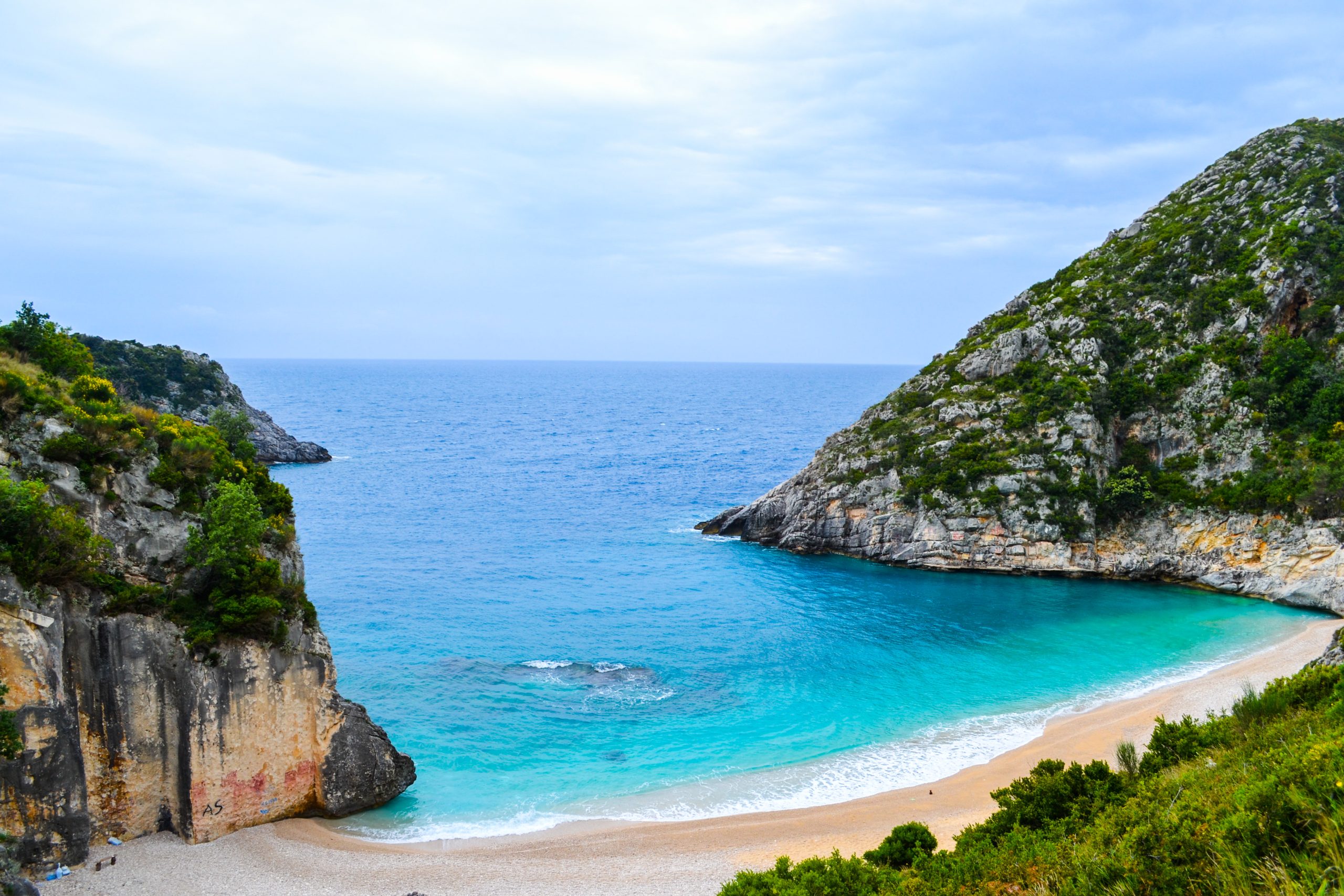 Grama is located in the southwest of the Karaburun peninsula. The bay was named Grama (greek: letter) from the markings/drawings left behind by sailors that found shelter inside the caves during sea storms. The earliest of these inscriptions date back to the III – II centuries BCE, up to the Roman and Byzantine eras.
Two important military and political leaders of the Roman Empire, Sulla and Pompey Junior, have also left their traces in Grama bay. This beautiful bay is easily accessible by boat from Green Coast Resort & Residences.

Llogara National Park is located 40 km south of Vlora, where the Ionian and Adriatic Sea meet. The park is known for its vast pine forests. Flamur Pine is one of the tallest trees in the park and has an exceptional ecological significance.
Air activities are very popular in the area, especially the paragliding competitions that are organized within the boundaries of the park. Lightning Mountains and picturesque beaches serve as the ideal environment to organize outdoor activities. The Akrokeraune Mountains begin here. 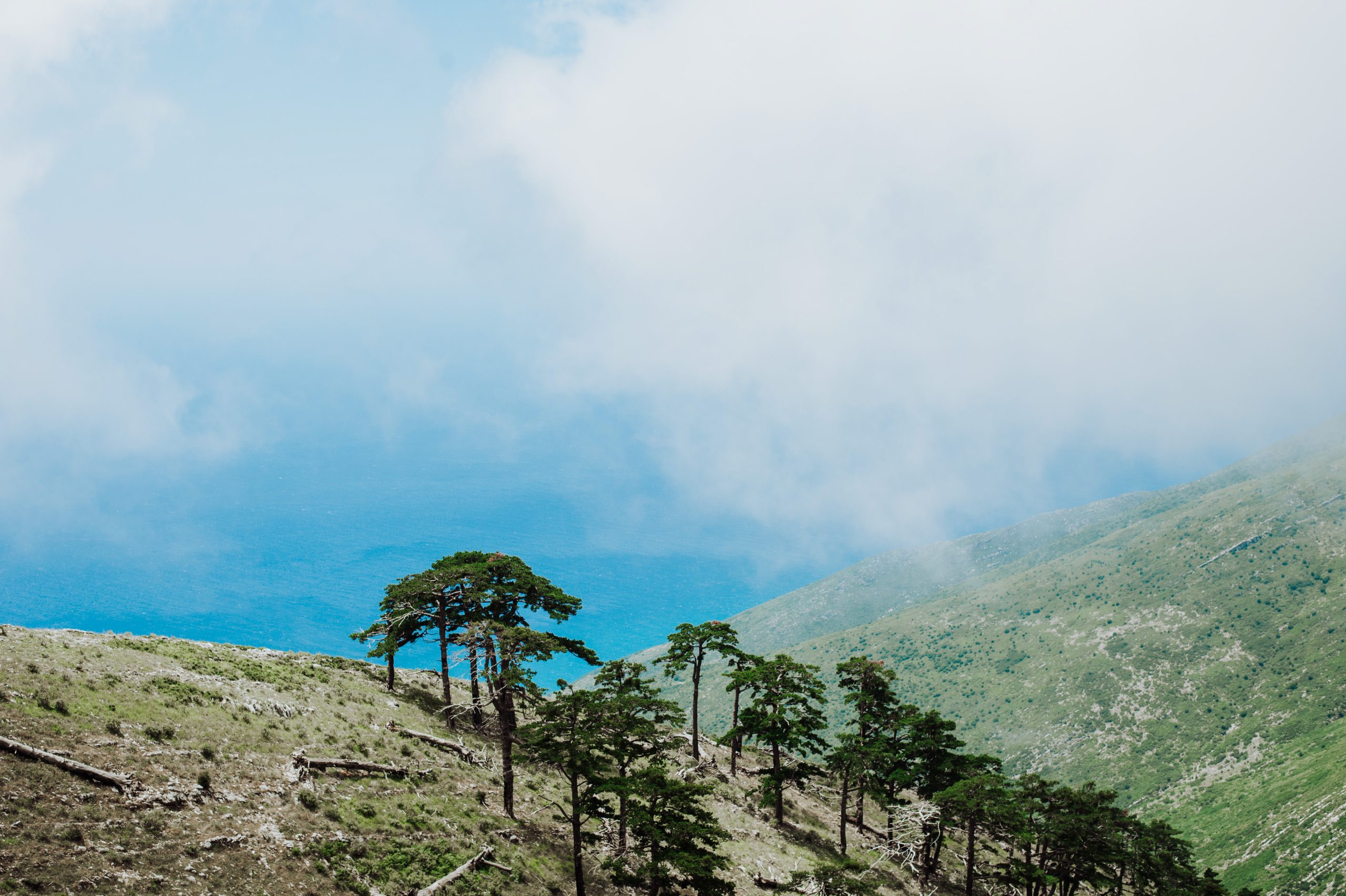 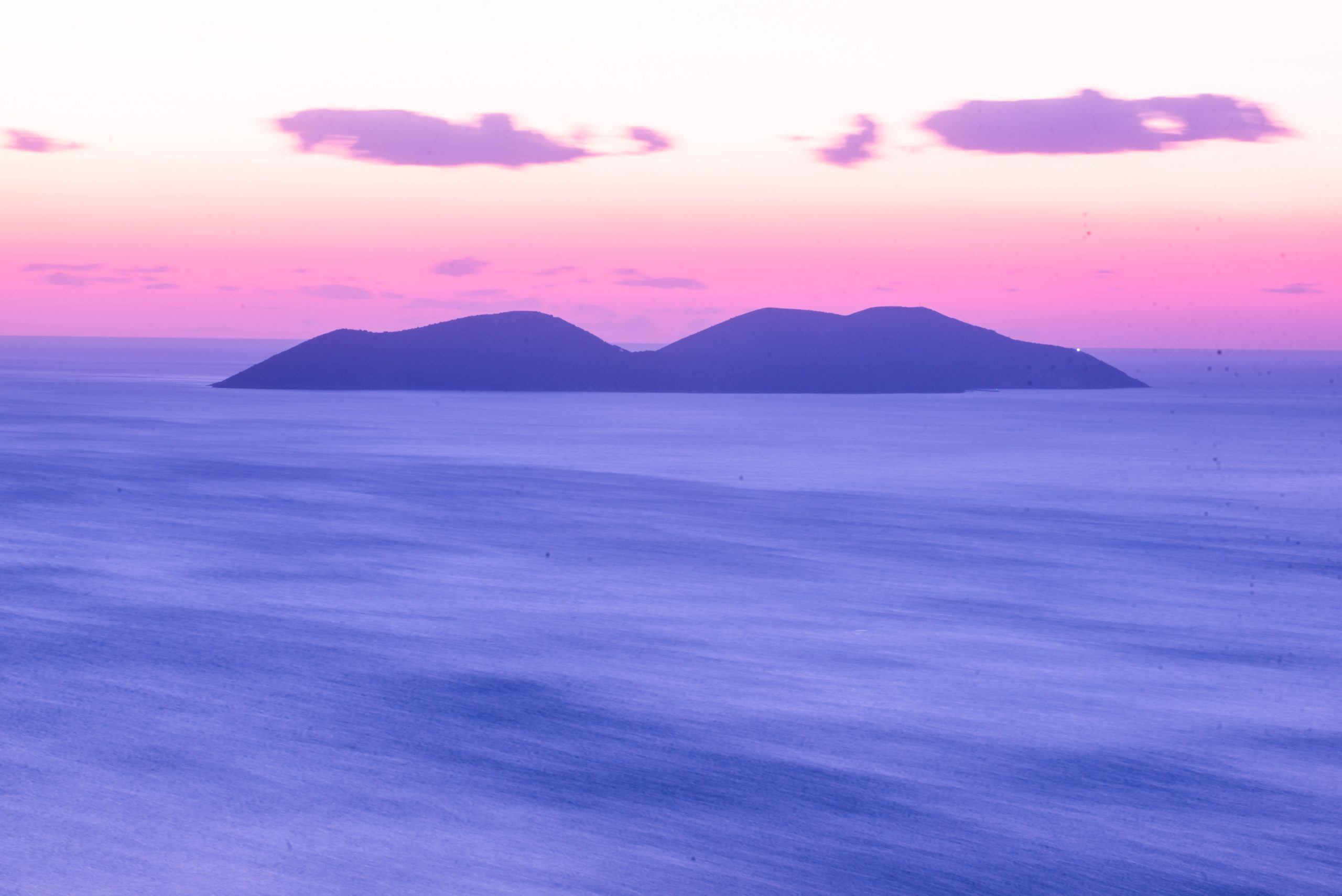